Subscribe to the Albuquerque Journal NIE
Already have an NIE subscription?

NBC Learn, the educational arm of NBC News, in partnership with the National Science Foundation (NSF) explores the impact that climate change is having on our planet. For related lesson plans, visit the Windows to the Universe project team at the National Earth Science Teachers Association.

Select a video by clicking on a topic below

After decades of surveying lizard populations around the world, scientists have found that rising temperatures due to climate change are driving many lizards to extinction.

Rising temperatures and drier conditions due to climate change are wreaking havoc on the world's forests, including the United States.

An insect about the size of a grain of rice, the mountain pine beetle, has killed hundreds of millions of ponderosa, lodgepole and other pine trees in the United States and Canada.

Scientists are helping to discover which varieties of grapes - the most valuable fruit crop in the world - can handle climate changes the best.

In the past century, as the climate has warmed, sea level rise has accelerated. Scientists predict it will only increase, and they're studying changes in the ocean and land to better understand how and why the water is rising.

Because of a warming atmosphere, permafrost -- the frozen ground that covers the top of the world -- has been thawing rapidly over the last three decades. But there is cause for concern beyond the far north, because the carbon released from thawing permafrost could raise global temeratures even higher.

With the threat of a warmer, wetter world and a larger global population, scientists are researching how climate change may impact the spread of infectious diseases, such as cholera and dengue fever, and how outbreaks may be prevented.

One of the bellwether species on the impact of climate change to our environment is the butterfly. Scientists say that warmer temperatures are affecting where butterflies live and breed, causing some species to migrate toward cooler climates near the earth's poles.

The world's glaciers are shrinking at alarming rates and many scientists believe it is due to changes in climate. In this installment, scientists discuss glaciers and how they melt and pay special attention to Africa's tallest mountain, Mt. Kilimanjaro. 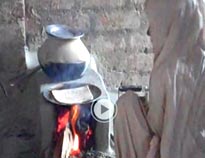 Black Carbon, composed of tiny particles of soot, is produced whenever organic substances like fossil fuels, firewood or coal are incompletely burned. These particles are polluting the air and causing serious health and environmental concerns for people around the world.

As higher amounts of carbon dioxide become absorbed by the oceans, some marine organisms are finding it's a struggle to adjust. 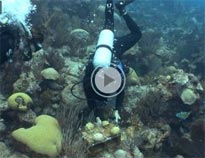 The delicate balance of life and environment which sustains coral reefs globally is under threat. The dramatic increase in atmospheric CO2 in the past few decades has produced an increase in ocean temperature and acidity. Coral diseases have also been on the increase, due to changes in their environment as well as pollution.

Fresh Water in the Arctic

Scientists are concerned that melting Arctic sea ice will increase the amount of fresh water in the Beaufort Gyre, which could spill out into the Atlantic and cause major climate shifts in North America and Western Europe.

Scientists studying lakes in northern and tropical latitudes are finding that rising lake water temperatures are affecting the ecosystems of the lakes.

Bermuda may be known as a luxurious vacation destination, but it also houses one of the world's leading institutes for ocean studies, called BIOS. Dr. Tony Knap explains how cliamte change is causing ocean temperatures to rise and what impact it may bring around the world.

As the global population continues to increase, scientists and farmers are concerned about the impacts that climate change could have on the world's crops. To better understand the process of photosynthesis and how plants use water and carbon dioxide to thrive, scientists are studying the stress limits of plants.

From warming ocean temptress, to melting glaciers, to bleaching coral reefs - many of the impacts of our warmer climate are visible on a global scale . But incredibly some impacts are happening in places that are invisible to the naked eye.

►Science behind the News

►Science of the Olympics

About the National Science Foundation

The National Science Foundation (NSF) is an independent federal agency that supports fundamental research and education across all fields of science and engineering. In fiscal year (FY) 2010, its budget is about $6.9 billion. NSF funds reach all 50 states through grants to nearly 2,000 universities and institutions. Each year, NSF receives over 45,000 competitive requests for funding, and makes over 11,500 new funding awards. NSF also awards over $400 million in professional and service contracts yearly.